Jack Wood is a senior from Carbondale Community High School in Carbondale, Illinois. He spent the week of March 14 interning at the Arms Control Association as part of his AP Government class. The following blog is his reaction to a March 15 event put on by the International Panel of Fissile Materials. 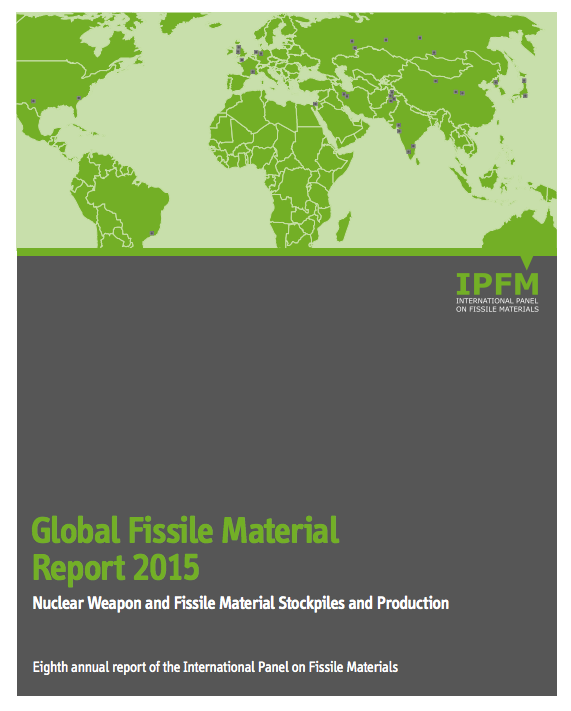 Last Tuesday, the International Panel on Fissile Materials (IPFM) held their biannual meeting at the American Association for the Advancement of Science (AAAS). IPFM is a Princeton-based organization with nonproliferation experts from multiple countries, both nuclear-weapon and non-nuclear-weapon states. At the meeting, various experts presented the results of the “Global Fissile Material Report 2015: Nuclear Weapon and Fissile Material Stockpiles and Production,” which highlights the uranium and plutonium stockpiles across the world and the continued production of those materials. Other topics of interest were introduced at the panel, including recommendations for ending the use and production of highly-enriched uranium (HEU), the future of civilian reprocessing for plutonium, and goals to reduce the stockpile of fissile materials in the future.

The global stockpile of HEU, uranium that has higher than 20 percent of the U-235 isotope, had been shrinking for nearly two decades until the Russian down-blending program for low-enriched uranium (LEU), less than 20 percent U-235, ended and the stockpile remained constant in 2014. At this point, the amount of HEU is about 1370 tons ± 125 tons. This uncertainty is due to limited transparency in some countries. Plutonium stockpiles have continued to increase from production for both civilian and military uses. Around 505 tons ± 10 tons of separated plutonium make up the global stockpile, with less than half of that made produced for weapons. India, Israel, and Pakistan still continue plutonium production for weapons, and India, Pakistan, and possibly North Korea continue HEU production for weapons.

There are many reasons why these fissile materials could be a problem. Possibilities such as nuclear terrorism and uneven nuclear security at facilities worldwide pose a threat to national security. If a terrorist were able to obtain enough plutonium or HEU for a weapon, they could create a crude nuclear device.

Another concern caused by stockpiles is the growing amount of plutonium. Reprocessing continues to increase the global stockpile as plutonium is extracted to be reused as nuclear reactor fuel. These growing stockpiles could make it easier for terrorism and provide material for countries to continue to increase their nuclear weapon stockpiles.

The increasing amount of fissile materials in the world has become a concern for nuclear security. However, some recommendations have been made that would help and prevent the continued rise. Down-blending of HEU to LEU has become an efficient way to dispose of HEU but still have the fuel benefits of LEU in both naval reactors and other nuclear power reactors.

Many states have adopted this policy and use LEU for their nuclear power plant fuel needs. Russia has successfully down-blended all of its excess HEU as part of an agreement with the United States, who still has 187 tons of HEU to down-blend. The United States could also declare more HEU as excess and commit to down-blending it.

Both HEU and LEU are important fuel sources for the seven countries that use naval reactors. However, four of those countries use HEU and three use LEU, leading to a question of which is better. The security benefits of LEU as naval reactor fuel are greater but HEU gives naval reactors a longer lifespan as opposed to LEU which generally give 10 years with needed refuels.

The United States has recently considered the possibility of switching over to LEU for their naval reactors, but this will take more time. Other countries currently using HEU have looked into using LEU and Russia has started making icebreakers with LEU cores, demonstrating that it is possible for the United States to develop this technology.

Transparency regarding how much information nuclear weapon states release regarding their nuclear programs is another important way to help end the uncertainty of the arsenals stockpiles of various states. With more openness from states it will be much easier to get a more certain estimate of the global stockpiles of nuclear materials. Russian transparency would be an important step forward due to the large amount of uncertainty regarding their stockpile of warheads and fissile materials.

Any of these recommendations could significantly help in boosting nuclear security and preventing nuclear terrorism. They must be considered by policymakers for the future.

The Nuclear Security Summit: Accomplishments of the Process