"...the Arms Control Association [does] so much to keep the focus on the issues so important to everyone here, to hold our leaders accountable to inspire creative thinking and to press for change. So we are grateful for your leadership and for the unyielding dedication to global nuclear security."
– Lord Des Browne
Vice Chairman, Nuclear Threat Initiative
Debate on Autonomous Weapons Resumes 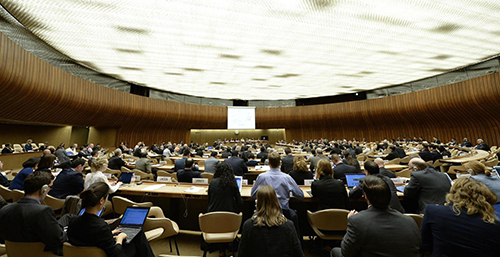 Representatives of 88 countries discussed the specter of robotic warfare at an April 13-17 meeting in Geneva, finding widespread agreement on the importance of controlling weapons that can automatically target and kill people without human control but failing to reach consensus on how to do that.

The informal experts meeting, called by the parties to the Convention on Certain Conventional Weapons (CCW) last November, was the second multinational conference held on the lethal autonomous weapons systems. The first meeting was held in Geneva last May. (See ACT, June 2014.)

A small group of states, including Cuba, Ecuador, the Holy See, and Pakistan continued to call for a ban on the autonomous systems that civil society groups have dubbed “killer robots.” In a statement to the gathering, Irfan Mahmood Bokhari of Pakistan said further development and use of such weapons systems “must be pre-emptively banned through a dedicated protocol of the CCW.”

Other countries called for action short of a ban.

“As a step forward at this stage,” Sweden’s delegation said in its opening statement, “we would encourage transparency and propose information-sharing measures among interested states.” A representative of Poland said, “It would seem at least advisable to...prevent transfers of such systems and their components to undesirable end users.”

But Michael Meier, the State Department official who headed the U.S. delegation, urged the meeting to “focus on increasing our understanding versus trying to decide possible outcomes.”

The multinational debate on lethal autonomous weapons was triggered by a May 2013 report, written by Christof Heyns, a South African jurist who serves as UN special rapporteur on extrajudicial, summary, or arbitrary executions. The report called for a moratorium on the building of such weapons. In a speech to last month’s conference, Heyns welcomed what he called “an emerging consensus that the notion of meaningful human control presents a guide to distinguish acceptable forms” of autonomous weapons.

In his draft final report on the meeting, chairman Michael Biontino of Germany said that “there was a general understanding that the debate needs further deepening. Delegations supported the idea that the CCW was the right forum for a continuation of the discussions, with some delegations indicating that other fora could complement the CCW debate.”

The parties to the CCW will meet in Geneva in November.