President Barack Obama promised in the 2010 “Nuclear Posture Review [NPR] Report” that his administration would reduce the number, role, and salience of nuclear weapons in U.S. defense strategy.

The “fundamental purpose” of the weapons, the review states, is to deter nuclear attack, not wage a nuclear war.

At the same time, the strategy called for maintaining and modernizing the remaining U.S. nuclear forces on a smaller triad of delivery systems as mandated by the 2010 New Strategic Arms Reduction Treaty. 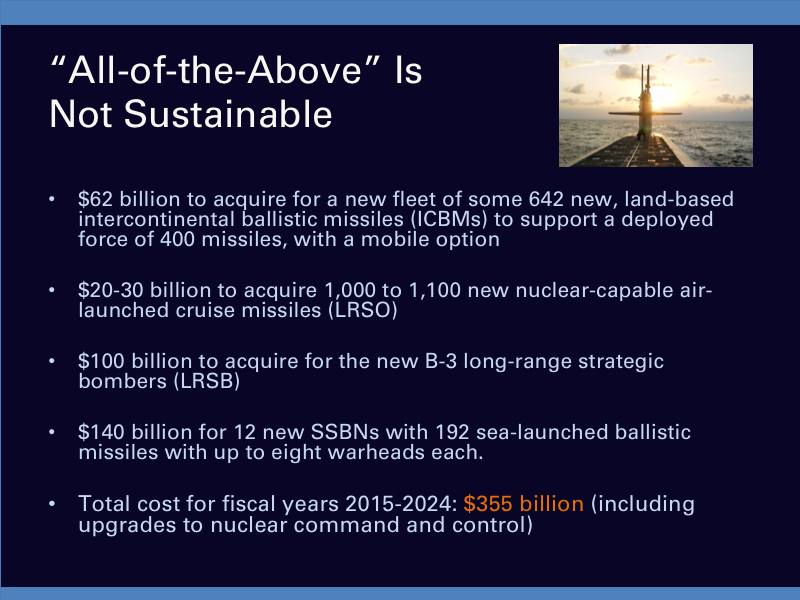 Current Pentagon plans call for 12 new nuclear-armed strategic submarines, 80 to 100 new penetrating strategic bombers (some or all of which will be nuclear capable), a fleet of new and stealthier nuclear-capable cruise missiles, and new land-based, intercontinental ballistic missiles that could reportedly be deployed on mobile launchers in the future, all at spending levels that exceed what was originally advertised.

In 2011 the Pentagon claimed that the cost for sustaining and modernizing nuclear delivery systems would be $126 billion and up to another $88 billion for warhead refurbishment and infrastructure modernization, for a total of about $214 billion.

In 2015 the Congressional Budget Office estimated the cost from fiscal years 2015 to 2024 would be about $348 billion, including upgrades to nuclear command and control.

Senior Pentagon leaders warn that there will not be enough money to fund all of the items on the military’s wish list. 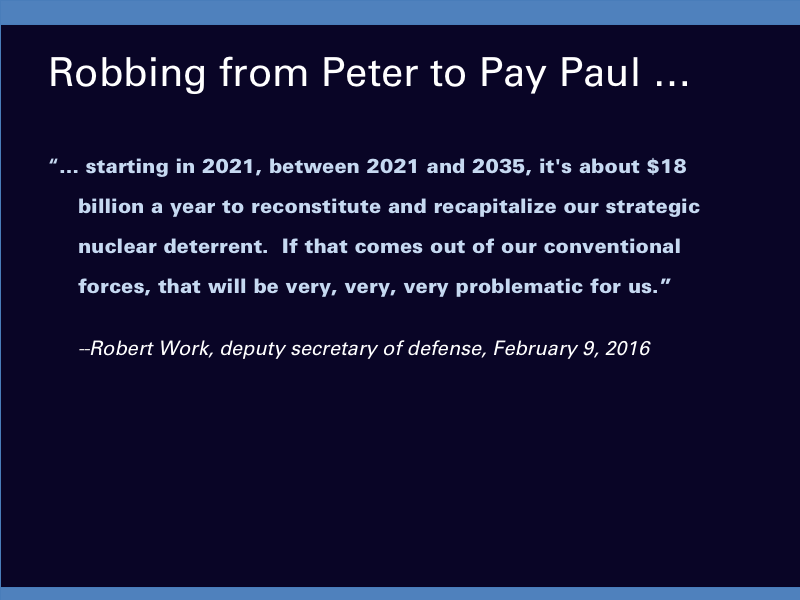 By the mid-2020s, the cost of nuclear weapons will consume 7 percent of the entire defense budget, according to Deputy Defense Secretary Robert Work.

And it could consume an even bigger slice of the Pentagon’s overall weapons acquisition budget.

The coming nuclear and conventional weapons budgetary “bow wave” has been apparent for some time. 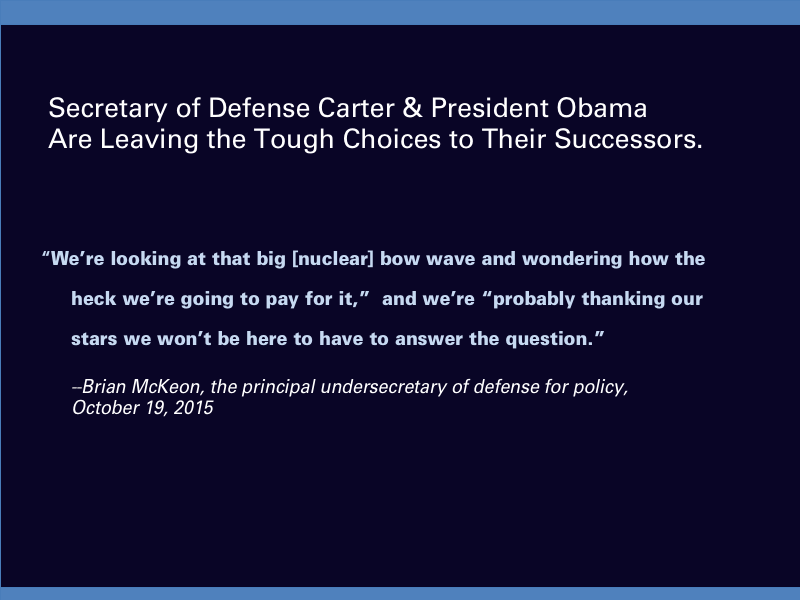 But rather than make common sense adjustments to the nuclear weapons modernization plan, Secretary of Defense Carter and his policy advisors including principal undersecretary for policy Brian McKeon, are pushing an all-of-the-above approach they know we can’t afford without making irrational cuts to other defense programs and they seem to be content to pass on the problem to their successors.

With one year left in his term, it is past time for Obama to chart a more realistic, affordable, and sustainable course.

We believe that in the near term, there are three important Defense Department programs that should be re-evaluated and adjusted. 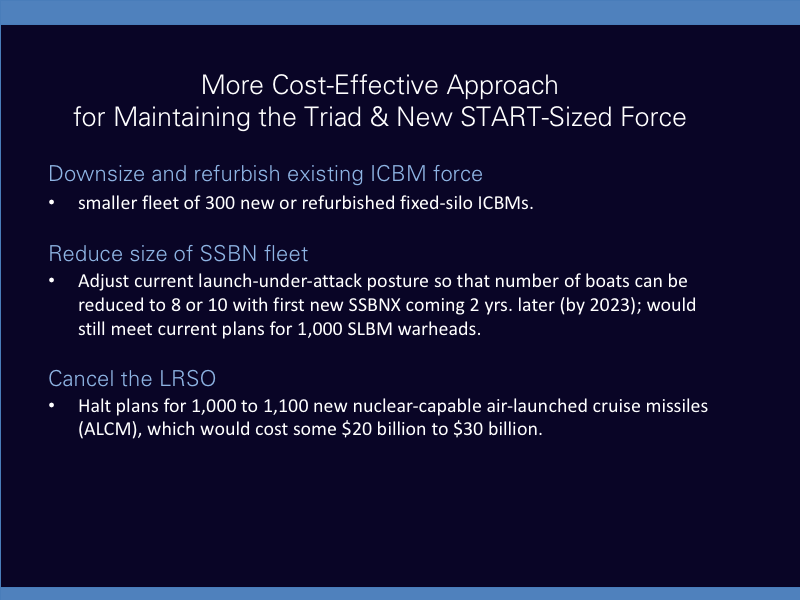 First, the president could announce that U.S. deterrence requirements do not require spending at least $62 billion on 642 new land-based missiles to support a deployed force of 400 missiles with a mobile option.

Instead, he could direct the Pentagon to pursue the deployment of a smaller fleet of 300 new or refurbished fixed-silo ICBMs.

Over the next decade, this approach could save up to $10 billion.

A 2014 RAND study estimated that the 39-year life cycle costs of sustaining the Minuteman III would cost $24-35 billion less than the current Air Force plan to procure a new missile with similar specifications.

Second, Obama also could announce that requirements for the sea-based leg of the triad can be met with a smaller fleet of strategic subs.

Under the current plans, the 12 new boats would carry 192 missiles with up to eight warheads each, at a cost of $140 billion to develop.

But with adjustments to the current launch-under-attack posture which require a larger number of subs on station and ready to fire their missiles at assigned targets quickly, that number of boats could be reduced to 8 boats and still meet current plans for 1,000 sea-based warheads.

As the most survivable of the three legs of the triad, the missiles sub force need not be maintained on a Cold War launch under nuclear attack to the mainland posture.

The Congressional Budget Office estimates such an approach would save approximately $20.9 billion over the next nine years, and more thereafter.

What is $20 billion? That is roughly one year of the Navy shipbuilding budget, or about the cost of an aircraft carrier, an attack submarine, a destroyer, three small surface combatant ships and four logistics ships.

Third, President Obama should order a halt of the program to develop a new nuclear-armed cruise missile, a.k.a. the long-range standoff weapon (LRSO). 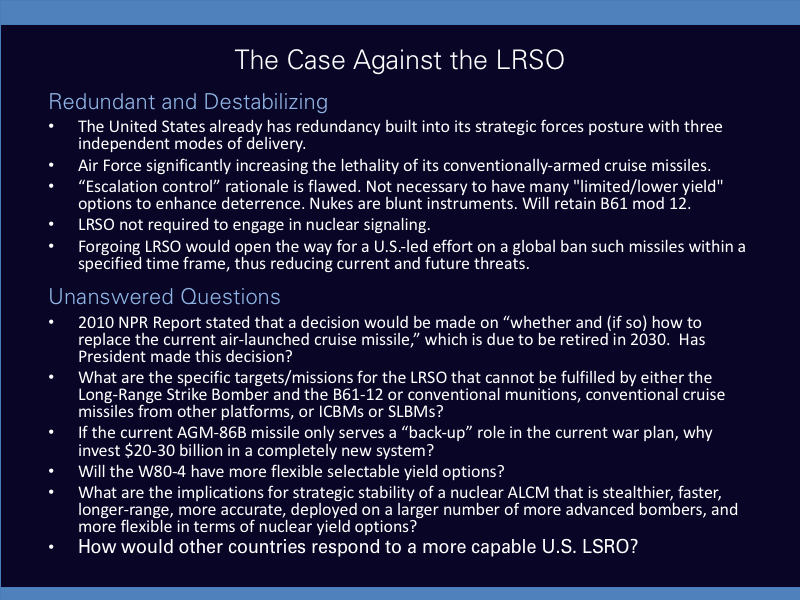 The Air Force wants 1,000 to 1,100 new air-launched, nuclear-capable cruise missiles at an acquisition cost of some $20 billion to $30 billion.

But, as former Secretary of Defense Bill Perry wrote last fall in The Washington Post: “The old Cold War requirement for such a capability no longer exists.”

In fact, the current AGM-86B missile only serves a minor “back-up” role in the current U.S. nuclear war plan. The new system, which would be more capable, is for escalation control and nuclear war-fighting, not deterrence.

Given that new nuclear-armed cruise missile would be redundant and destabilizing, why invest $20-30 billion in a completely new system?

The current ALCM will be in the arsenal for more than a decade, and the Air Force is poised to spend $100 billion on its stealthy new strategic bombers to penetrate enemy air defenses with newly refurbished B61 nuclear gravity bombs. A new, long-range, precision conventional cruise missile is now being introduced for delivery by existing and new bombers and fighter jets.

Without the LSRO, we would still have a formidable air-leg of the nuclear triad.

Halting the new cruise missile program would also open the way for a U.S.-led effort on a global ban on all nuclear-armed cruise missiles within a specified time frame, thus reducing current and future threats to the United States. This will not be easy but it is worth pursuing.

Before plunging forward with the LRSO, Secretary Carter, or his successor, should address a number of basic questions, including (but not limited to):

For now, efforts to negotiate further U.S. and Russian nuclear reductions are on hold – at least until New START expires in 2021.

Russia has rebuffed President Obama’s 2013 proposals for further nuclear cuts and violated the 1987 Intermediate-Range Nuclear Forces Treaty. The danger of close encounters between NATO and Russian aircraft has increased tensions.

Russian Prime Minister Dimtry Medvedev suggested over the weekend in Munich that we are in a “new Cold War.”

But the proposals for a more affordable strategic nuclear force that I just outlined still would allow for a New START force for a decade beyond its expiration.

Today, Russia possesses some 1,780 nuclear warheads and the United States some 1,900 that can be delivered on several hundred strategic bombers and missiles. If used even in a “limited” way, the result would be a humanitarian catastrophe.

It makes little sense for either side to pursue a multi-decade nuclear weapons spending binge that promises to perpetuate excessive force levels and Cold War-era war-fighting capabilities for generations to come.

That does not deter Russia’s meddling in Ukraine or protect nervous NATO allies in the Baltics.

President Obama and Secretary Carter can still use the time they have left in office to reduce the role and number of nuclear weapons by trimming back and in some cases forgoing redundant and costly nuclear weapons systems.

By doing so, he would open the way to further reducing the role and size of U.S. and Russian nuclear forces and to a safer and more secure future.