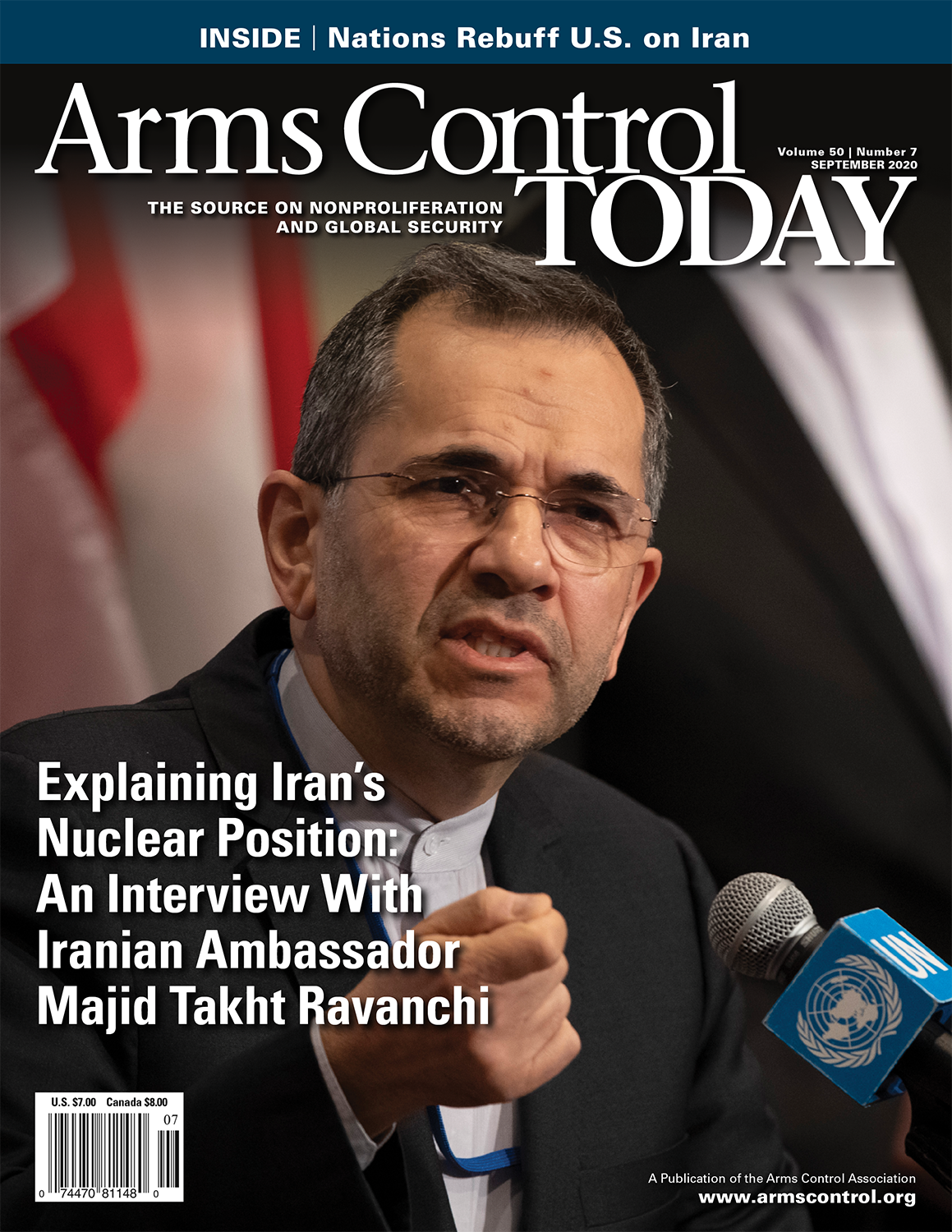 The United Arab Emirates on Aug. 1 became the first Arab country to operate a nuclear power plant when officials announced that the first of four planned reactors at the Barakah nuclear power station achieved criticality by completing a sustained fission reaction. According to the UAE leadership, once all four units at the Barakah plant are operational, nuclear power will account for a quarter of the country’s electricity and reduce the nation’s reliance on oil and gas.

The UAE’s nuclear progress has highlighted concerns about the security implications of an uptick in nuclear programs in the Middle East. Saudi Arabia is in the early stages of developing its nuclear program, and Iran has a demonstrated uranium-enrichment capability. Israel has an assumed arsenal of nuclear weapons.

But according to Dina Esfandiary, a fellow at The Century Foundation with expertise in the Persian Gulf region, the UAE nuclear program does not pose a proliferation risk. Abu Dhabi has taken deliberate measures to publicly signal the strictly peaceful application of its nuclear program, Esfandiary told Arms Control Today. These measures include the country’s decision to forgo uranium enrichment, among other things. The UAE is also a party to the nuclear Nonproliferation Treaty and has had an additional protocol to its safeguards agreement with the International Atomic Energy Agency in place since 2009. (See ACT, October 2019.)—JULIA MASTERSON

Getting Back on Course

Seventy-five years after the horrific atomic attacks on Hiroshima and Nagasaki, we all still live under the existential threat of a catastrophic nuclear war. Although citizen pressure and hard-nosed U.S. diplomacy have yielded agreements that have cut the number of U.S. and Russian nuclear weapons, prevented their proliferation, and banned nuclear testing, there are still far too many nuclear weapons, and the risk of nuclear war is growing. As the mayors of Hiroshima and Nagasaki recently warned “We are badly off course in efforts to honor the plea of the hibakusha, the survivors of the 1945 atomic bombings, and end the nuclear threat.”

Tensions among many of the world’s nine nuclear-armed states are rising, and each is working on costly upgrades of their deadly arsenals. Leaders in Washington and Moscow cling to Cold War-era “launch under attack” postures and the option to use nuclear weapons first. Both are seeking new nuclear capabilities, including “more usable,” lower-yield warheads.

Unfortunately, U.S. President Donald Trump came into office without a clear plan for reducing the nuclear danger. In one breath, he will threaten to “win” a new arms race; in the next, he will declare his hope for arms control deals that more effectively constrain U.S. adversaries.

Under Trump, no new nuclear deals have been struck. After threatening North Korea with nuclear “fire and fury” in 2017, he squandered chances to negotiate peace and denuclearization with its leader, Kim Jong Un. As a result, Pyongyang’s nuclear capabilities are expanding.

Ignoring the value of the hard-won 2015 Iran nuclear deal, Trump pulled out of the agreement and reimposed U.S. sanctions. Predictably, this led Iran to retaliate rather than negotiate a new deal. Although the United States no longer has the legal standing to do so, Trump is seeking to reimpose UN sanctions on Iran. Nearly all other UN Security Council members reject the ploy and remain determined to preserve the nuclear deal.

Trump has also discarded key agreements, including the Intermediate-Range Nuclear Forces Treaty and the Open Skies Treaty, that have kept U.S.-Russian nuclear competition in check. Worse yet, Trump has so far refused to take up Russia’s offer to extend the New Strategic Arms Reduction Treaty (New START).

Events and decisions in the coming weeks will determine our nuclear future for years to come. It is highly unlikely that Trump, if elected for a second term, is capable of a course shift. On the other hand, Democratic presidential candidate Joe Biden, who has a long history of support for effective arms control, could be expected to try to address many but not all of Trump’s missteps.

No matter who occupies the White House in 2021, unrelenting and focused pressure from civil society, Congress, and responsible governments around the globe will be needed to correct U.S. nuclear policy. Key elements of an action plan should start with

The historic 2017 Treaty on the Prohibition of Nuclear Weapons, which will soon enter into force, is an important step toward the delegitimization of nuclear weapons possession and use. Even if the United States cannot join the treaty yet, Washington should welcome its arrival as a part of the legal framework for the eventual elimination of nuclear weapons.

Today’s dizzying array of nuclear dangers requires bold action. Getting the world back on the road toward a world without nuclear weapons will not be easy, but it can be done.

Seventy-five years after the horrific atomic attacks on Hiroshima and Nagasaki, we all still live under the existential threat of a catastrophic nuclear war.

The Executive Council of the Organisation for the Prohibition of Chemical Weapons (OPCW) voted on July 9 to adopt a decision demanding that Syria cease all use of chemical weapons and come clean on its illegal arsenal. The decision acknowledges that “there are reasonable grounds to believe” that Syria used chemical weapons, marking the OPCW’s most formal finding of a state in violation of the Chemical Weapons Convention (CWC) since the treaty entered into force in 1997.

Syria acceded to the CWC in 2013 and cooperated with international efforts to destroy its declared chemical stockpile, but horrific chemical weapons attacks have continued on an irregular basis since then and throughout the country’s ongoing civil war. The OPCW’s July decision was the international watchdog’s most strident response to Syria’s chemical weapons program since reports of these attacks first resurfaced in 2014. (See ACT, October 2014.)

The UN Security Council was scheduled to convene in August to discuss Syria’s chemical weapons program. A readout from this briefing has not been made public, but, coupled with the OPCW decision and recent investigations by the organization into chemical activity in Syria, renewed attention to Syria’s chemical weapons in multilateral forums has signaled an international commitment to enforce the country’s return to CWC compliance.

The OPCW Executive Council decision in July followed an inaugural April 8 report by the chemical watchdog’s new Investigation and Identification Team (IIT), which is tasked with identifying perpetrators responsible for chemical weapons attacks in Syria. The report attributed responsibility for a series of sarin and chlorine attacks to the Syrian Air Force after finding that sarin dropped over the town of Ltamenah, Syria, in March 2017 shared a unique chemical signature with samples of the nerve agent retained in OPCW labs after the destruction of Syria’s declared stockpile. (See ACT, May 2020.)

In light of these findings, the Executive Council’s new decision imposes a strict 90-day deadline for the Syrian government to declare the remainder of its stockpile, including all chemical agents, their precursors, and the facilities where chemical weapons are developed, produced, and stored. The decision also empowers the OPCW Technical Secretariat to conduct biannual inspections at Syria’s Shayrat and Hama airbases, which were identified in the April IIT report as directly involved in the March 2017 chemical attacks.

In his statement before the Executive Council’s 94th session in July, Bassam Sabbagh, Syria’s permanent representative to the OPCW, slammed efforts to attribute blame for chemical weapons use in Syria to the Syrian government. Damascus has consistently rejected OPCW findings of Syria’s ongoing involvement in chemical weapons attacks, including those outlined in the April IIT report.

The Syrian Foreign and Expatriates Ministry previously called the April report “misleading” and said that Syria “condemns, in the strongest terms, what has come in the report of the illegitimate so-called Investigation and Identification Team, and rejects what has been included in it, in form and content.”

Russia also condemned the April IIT report as flawed and untrustworthy, and China views the organization’s ongoing attribution work as an overstep of the CWC mandate. Neither country expressed great satisfaction with the Executive Council’s July decision.

Mikhail Ulyanov, Russia’s permanent representative to international organizations in Vienna, tweeted on July 9 that “everything was politically motivated. This is another sign of further degradation of [the] OPCW.”

Fu Cong, who heads the Chinese Foreign Ministry Department of Arms Control, called the July decision “politically motivated” and “based on a flawed ‘investigation’” in a tweet also published that day.

The Executive Council’s decision was otherwise met by overwhelming support, including by the U.S. State Department, which applauded the decision in a statement published July 9.

In accordance with the decision, the OPCW director-general will report to CWC states-parties in October on whether Syria fulfilled the prescribed mandate. If Syria fails to do so, the Executive Council could recommend that states-parties vote to take action under CWC Article XII, restricting the country’s rights and privileges under the treaty.

Article XII offers a series of steps to redress a situation and ensure a country’s compliance with the CWC that ultimately ends in referral to the United Nations. Should Syria fail to meet the Executive Council’s 90-day deadline, the issue could soon be in the hands of the UN Security Council, which holds the authority to impose more significant consequences.

The July decision notably reaffirms the Executive Council’s position that perpetrators of chemical weapons attacks must not only be identified but also held accountable. It emphasizes “the importance of affording to the greatest measure of assistance in connection with criminal investigations or criminal proceedings in accordance with international law,” specifically relating to the chemical weapons attacks detailed in the April IIT report.

It also references the UN International, Impartial, Independent Mechanism (IIIM) tasked with assisting in the investigation of crimes committed in violation of international law in Syria since 2011. The IIIM lacks legal authority to prosecute those in violation of international law, but its mandate calls for the collection of evidence to support the criminal proceedings of those tried in national or international courts and tribunals. The Executive Council’s July decision welcomes a memorandum of understanding between the OPCW and the IIIM.

The OPCW Executive Council set a 90-day deadline for Syria to comply with the Chemical Weapons Convention.