By Maggie Tennis and Kingston Reif

The United States and Japan last month conducted the first successful test of a new ballistic missile defense interceptor that will increase the capability of U.S. and allied regional defenses in Europe and Asia.

Meanwhile, a January report from the Pentagon’s top testing official strongly criticized the missile defense system designed to protect the U.S. homeland against a limited long-range missile attack from North Korea or Iran, known as the Ground-Based Midcourse Defense (GMD) system. The successful Feb. 3 test and the critical report on the GMD system from the Pentagon’s director for operational test and evaluation come as the Trump administration prepares to conduct a formal review of U.S. missile defense policy and posture. 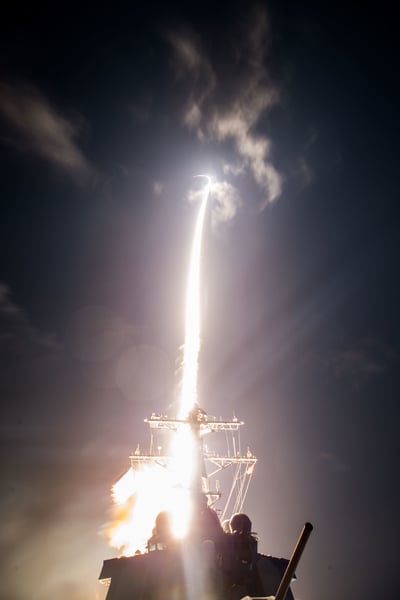 In the February test, a Standard Missile-3 (SM-3) Block IIA launched from the USS John Paul Jones off the western coast of Hawaii successfully destroyed a medium-range ballistic missile target launched from the Pacific Missile Range Facility at Kauai, Hawaii. The SM-3 IIA is being developed cooperatively by the United States and Japan to defeat medium- and intermediate-range ballistic missiles. The interceptor is part of the Aegis missile defense system and can be fired from specially designed Aegis ships or land-based sites.

The Aegis system is a central component of the U.S. missile defense architecture in Europe and Asia. As of Feb. 3, the Missile Defense Agency (MDA) has conducted 41 intercept tests of the system, of which 34 were successful.

The Defense Department is planning to deploy the SM-3 IIA missile in Poland in 2018 as part of the third phase of the so-called European Phased Adaptive Approach. (See ACT, June 2016.) The approach is the U.S. contribution to NATO’s missile defense system and is designed to protect Europe against short-, medium-, and intermediate-range ballistic missiles launched from Iran.

Russia has strongly opposed the planned Polish site and claims that the alliance’s missile defense plans are aimed at undermining Moscow’s nuclear deterrent. U.S. and NATO officials have stated repeatedly that the SM-3 system will not be able to shoot down Russian intercontinental ballistic missiles (ICBMs).

In a Feb. 8 email to Arms Control Today, Christopher Szkrybalo, an MDA spokesman, said the SM-3 IIA “was neither designed nor planned to defend the U.S. against ICBM threats.”

Although the SM-3 IIA was successful in its first intercept test, the Pentagon’s testing office raised concerns about the viability of the GMD system. Consistent with prior assessments, the office’s 2016 annual report states that the system “has demonstrated a limited capability to defend the U.S. Homeland from small numbers of simple intermediate-range or intercontinental ballistic missile threats launched from North Korea or Iran.”

The report notes that the “reliability and availability” of the system’s interceptors “are low” and the MDA “continues to discover new failure modes during testing.” The report also notes that “[f]ew cybersecurity assessments have been performed” of the system to date.

The GMD system consists of interceptor sites in Alaska and California. A total of 44 interceptors are scheduled to be deployed at these locations by the end of fiscal year 2017.

It remains to be seen whether and how President Donald Trump will adjust missile defense policy. In a Jan. 27 executive order, he ordered Defense Secretary James Mattis to conduct a new Ballistic Missile Defense Review “to identify ways of strengthening missile defense capabilities” and “rebalancing homeland and theater defense priorities.” Such a rebalance could lead to greater emphasis on and funding for expanding the GMD system, including by building a third GMD site in the eastern United States, at the expense of regional defenses such as the Aegis system. (See ACT, January/February 2017.)

Last year, Congress voted to open the door to expanding national missile defenses beyond the currently limited goal of defending against Iran and North Korea as some, predominantly Republican backers eye actions that some worry could upset the nuclear balance with Russia and China. (See ACT, January/February 2017.)

A ballistic missile interceptor scores a hit, but there is renewed criticism of a missile defense system.

By Terry Atlas and Maggie Tennis

The U.S.-Russian dispute over compliance with the Intermediate-Range Nuclear Forces (INF) Treaty is growing, with a report that Russia has deployed a new ground-launched cruise missile (GLCM) banned by the 1987 accord. 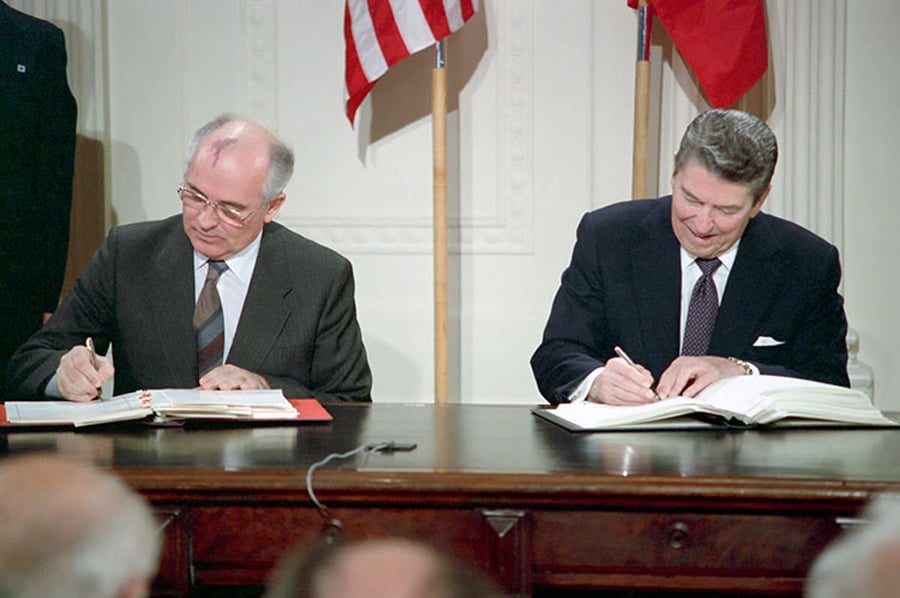 The Russian action, disclosed by unnamed U.S. officials cited in The New York Times on Feb. 14, casts a pall over the future of the landmark Cold War-era agreement by the two countries credited with eliminating an entire category of nuclear weapons.

Senate Armed Services Committee Chairman John McCain (R-Ariz.) said in a statement that the deployment presents “a significant military threat to U.S. forces in Europe and our NATO allies” and requires that the United States “take immediate action to enhance our deterrent posture in Europe and protect our allies.” But no European nation has publicly cited the development as changing the military balance in Europe or requiring military countermeasures that could fuel an arms race in Europe.

The development presents a major challenge for President Donald Trump, who has frequently said he will seek to lower tensions with Russia, which has set out its own complaints that the United States is violating the treaty with some missile defense activities. In response to the new report, Kremlin spokesman Dmitry Peskov said Feb. 15 that Russia remains committed to its international obligations, including those under the INF Treaty, according to the state-owned Russian news agency TASS.

Beyond the immediate implications for the INF Treaty, the new Russian cruise missile deployment comes at a time of nervousness over U.S. security commitments in the aftermath of Russia’s seizure of Crimea, its ongoing intervention in Ukraine, and threats to other borders in Europe. In one sign of allies’ anxieties, a senior Polish political leader last month floated the idea that the European Union develop its own nuclear deterrent, a move he acknowledged is unlikely given the costs and other factors.

The United States and Russia have been shadowboxing over alleged INF Treaty violations for several years, during which positions on both sides seem to have hardened. In July 2014, after months of press reports, the Obama administration notified Congress of its finding that Russia had been testing a new cruise missile and was “in violation of its obligations under the INF Treaty not to possess, produce, or flight-test … [GLCMs] with a range capability of 500 km to 5,500 km, or to possess or produce launchers of such missiles.” Russia had called the allegation “groundless,” and a rare meeting of the dispute resolution body known as the Special Verification Commission, called by the United States in November 2016, failed to resolve the issues.

Mikhail Ulyanov, director of the Russian Foreign Ministry’s Department for Non-Proliferation and Arms Control, called the prospect of resuming dialogue with the United States on the INF Treaty a “thankless task,” according to an interview with state-owned RIA Novosti news agency, published Feb. 8. Ulyanov said that the Kremlin is waiting to see how the Trump administration will follow up on the Obama administration’s allegations against Russia as well as how it will respond to Russian allegations against the United States. Russia contends that the United States is violating the INF Treaty by placing a missile defense launch system in Europe that also can be used to fire cruise missiles, using targets for missile defense tests with similar characteristics to treaty-prohibited intermediate-range missiles, and making armed drones that are equivalent to GLCMs.

Ulyanov condemned U.S. efforts to expand its missile defense capabilities in Europe and the Pacific. “We believe that the unilateral deployment of such systems without considering other countries’ interests—in the first place, the Russian Federation—is not only unconstructive, but also harmful and dangerous,” he said.

At the same time, Ulyanov dismissed predictions that the United States and Russia are headed toward an arms race. Russia will use diplomacy or a “military-technical response” to respond to what it perceives as a destabilizing initiative by the United States to build up its global missile defense system, he said.

What has been a persistent U.S. concern during the alleged development of a new Russian cruise missile has escalated with news of apparent limited deployment. The administration will now have to weigh whether to respond with military capabilities as well as how it will affect the prospects for any possible new nuclear arms control initiatives.

Under the INF Treaty, the two sides eliminated 2,692 short-, medium-, and intermediate-range nuclear-armed missiles by 1991. Those missiles were seen to be particularly destabilizing because, with their very short flight time, they allow a leader only minutes after a possibly false attack warning to decide whether to launch a nuclear second strike.

Russia has two battalions of the new cruise missile, which U.S. officials called the SSC-X-8 during the development phase, according to the Feb. 14 New York Times article. One of those battalions was shifted to an operational base in December, the newspaper reported, citing U.S. officials.

Russia is waiting to see what develops out of the new administration’s review of U.S. nuclear policy. Ulyanov said that the Russians remain focused on finding common ground with the Trump administration and that Russia and the United States are likely to cooperate regarding the nonproliferation of weapons of mass destruction. The Obama administration chose to try quietly to sway the Russians to halt the missile development. With the report of the system’s deployment, it may be more difficult for Trump to do the same, if so inclined.