In his remarks to the Arms Control Association’s annual meeting on October 20, Des Browne, vice chairman of the Nuclear Threat Initiative and former UK defense minister, surveyed the international landscape and offered a set of recommendations for bolstering and reinvigorating the disarmament and nonproliferation regime. A lightly edited excerpt from his remarks is presented below. The full text of Browne’s remarks is available at http://www.armscontrol.org/events/annual-meeting-2014/rsvp. ACT

As the 2015 Nuclear Nonproliferation Treaty [NPT] Review Conference approaches, one question many of us have considered for a number of years is how to revitalize the process itself. Transparency is the key. I believe that we need to open it up and make it more accountable. 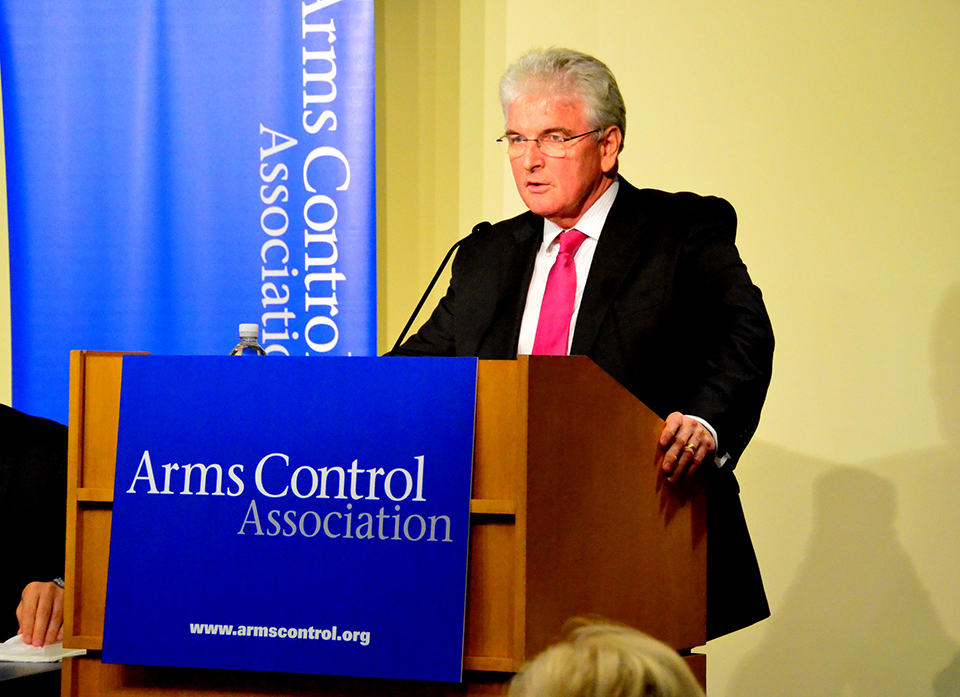 A successful 2015 NPT Review Conference also would require countries to take a series of steps before the conference convened, but we are running out of time to do that. Among them, as proposed by the European Leadership Network in a recent statement,1 is that Russia, the United States, and the United Kingdom, as the three NPT depositary states, should issue a statement jointly with the UN secretary-general confirming that they will work towards setting up a conference on the weapons of mass destruction-free zone in the Middle East.

Nuclear-weapon states should agree to be more transparent and demonstrate greater commitment to the goal of disarmament. The United States and Russia should reiterate their willingness to maintain a nuclear arms control and disarmament dialogue despite current tensions in their relationship. Somebody has to make the first move in relation to this.

The prompt-launch posture of the U.S. and Russian nuclear forces may be an area ripe for progress too. A quarter of a century after the end of the Cold War, each country still deploys hundreds of long-range ballistic missiles—land and sea based—with roughly 2,000 nuclear warheads promptly set to destroy each other. Each maintains large nuclear forces on day-to-day alert, ready for launch and capable of hitting their targets in less than 30 minutes. This launch-on-warning posture is set to ensure that there can be no advantage from a first strike.

But inherent in this posture is the risk of an accidental or unauthorized launch by either side, as well as the risk that a deliberate decision to use ballistic missiles will be made in haste on the basis of faulty or incomplete data. What’s more, the risks posed by these force postures are increasing as cyber threats and nuclear missile capabilities proliferate in other countries.

So, what can be done? Ultimately, the United States and Russia could agree to mutual, reciprocal steps to reduce dangers by changing the nature of their force postures. These steps could be taken as part of a future process to repair the breach opened between the West and Russia over Ukraine. In the meantime, I strongly believe that other governments and nongovernmental organizations [NGOs] must work to increase awareness of this threat and keep the issue visible with governments and publics.

We need to make it possible for Moscow and Washington to see the political and diplomatic benefits, in addition to the security benefits, of acting on this issue, and we need to underscore to the countries that might be considering adopting such force postures in the future that they would decrease their security and have no support in the international community.

There is another interesting idea in conjunction with the third conference on the humanitarian impact of nuclear weapons, which will be held in Vienna in December, and the review conference next year. First, I’ll [say] that it is important for the [five nuclear-weapon states] to attend [the Vienna] conference, which they have not yet agreed to do. In fact, I tell you, from the point of view of the United Kingdom, if the United States agrees to go, we will go. It is no coincidence that we have not made up our mind for each of the last two conferences until immediately after the United States made the decision.

I am optimistic and hopeful that strong voices within the U.S. executive branch are making the argument for [U.S. participation], that this needs to be a cooperative effort. If you want to have nuclear weapons, you have to live with the responsibility of the consequences of them and explain to others how you will deal with that challenge. Both of these conferences [on humanitarian impacts] concluded that no country in the world can deal with the consequences of the use of nuclear weapons and no country is capable of building the capability to do that.

Now, either we agree with that or we disagree with it, those of us who hold nuclear weapons. If we agree with it, we have to explain then to the rest of the world who does not have these weapons why that is a morally consistent position to be in and why we are not building the capability to do it. If we do not agree with it, then we need to explain why it is wrong. But we are not uninterested in this. We have a responsibility, if we depend for our strategic security on these weapons, to engage with this challenge. Either that is true or it is not, and if it is true, we have to live with the consequence, and we need to be there.

[Second,] the United States and others at the conference should press states not yet engaged in the nuclear disarmament process to freeze the size of their arsenals and their fissile material stockpiles as a first step toward multilateral, verifiable reductions. [There is] a compelling case that a freeze could lead to further disarmament.2
As for the Comprehensive Test Ban Treaty [CTBT], we are a long way away from 1996, when its adoption represented a high-water mark for multilateralism. There’s no question we have made progress since then and the treaty has established a de facto global moratorium on testing, but we need to get the job done. I’m confident that we can do it with a concerted, coordinated effort by governments, civil society, and the international scientific community.

Today, there is a group of eminent persons—senior statesmen, politicians, and experts—who [are] engaging with leaders in capitals of states that haven’t ratified to press the case [for the CTBT]. All of us, though, can do more to answer arguments against ratification, and we can do it with answers based on not just critical thinking, but also on science. Among the arguments against the CTBT is that verification and monitoring will not work, but now we have a state-of-the-art system in place, and important improvements are still being made. So, let me remind everyone here that we have a very solid answer to the CTBT critics, and we must dedicate ourselves to persuading them and demanding action from them.

So, these are just a few ideas for how to move forward. Let me also briefly describe one of the projects that the Nuclear Threat Initiative has been working on recently. I believe it offers a good example of the kind of innovative and groundbreaking work the NGO community can do, often cooperatively with governments, to make progress on reducing the risks posed by nuclear materials and nuclear weapons. I am referring to a two-year project entitled “Innovating Verification: New Tools and New Actors to Reduce Nuclear Risks.”

The project has involved more than 40 technical and policy experts from a dozen countries collaborating to produce innovative new concepts and confidence-building and transparency measures. In a series of reports issued earlier this year,3 the project calls for the international community fundamentally to rethink the design, development, and implementation of arms control verification. Participants made recommendations on verifying baseline declarations on nuclear warheads and materials, on how to define and take advantage of societal verification methods, and how to build global capacity.

It was important that the project was undertaken with experts from around the world because although it may be a truism, it cannot be said enough: When it comes to nuclear security, global challenges require global solutions, not to mention elevated thinking.

I look forward now to answering questions and hearing any ideas that you may have for us to make progress on these very complex and challenging issues. My own work in this field would not have been possible without steady optimism about the possibility for progress, and the dedication of those of you here today gives me more cause for optimism. Thank you very much.

1. European Leadership Network, “Necessary Steps for a Successful 2015 Review Conference of the Non-Proliferation Treaty,” May 1, 2014, http://www.europeanleadershipnetwork.org/group-statement-on-necessary-steps-for-a-successful-2015-review-conference-of-the-non-proliferation-treaty-_1414.html.

3. For the series of reports outlining the recommendations from the Nuclear Threat Initiative’s Verification Pilot Project, see http://www.nti.org/analysis/reports/innovating-verification-verifying-baseline-declarations-nuclear-warheads-and-materials/.

The Papal Vision: Beyond the Bomb

Learning From the 2015 NPT Review Conference