Since 1971, the Arms Control Association is proud to have played a part in advancing and securing major arms control and nonproliferation successes that have helped avoid bad situations from becoming much worse. The Arms Control Association has shown it can deliver authoritative information, ideas, and analysis that help shape the public policy debate in Washington, across the United States, and around the world.

1971: Arms Control Association is founded by leading military, defense, and diplomatic officials involved in the early years of nuclear and chemical arms control and nonproliferation.

1975: The Association co-hosts a three-day international conference in France on policy recommendations for governments before the first-ever nuclear Nonproliferation Treaty (NPT) review conference 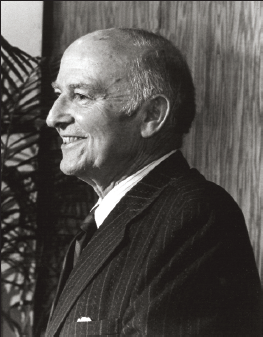 1977: The Association co-hosts the first of several annual international meetings for young arms control analysts and scholars (New Faces Conferences). The Arms Control Association itself becomes a training ground, helping to launch the careers of many men and women who later served in high government positions.

1983: The Association commemorates the 20th anniversary of the Limited Test Ban Treaty by honoring its chief U.S. negotiator, W. Averell Harriman, and calls for the renewal of comprehensive test ban talks. 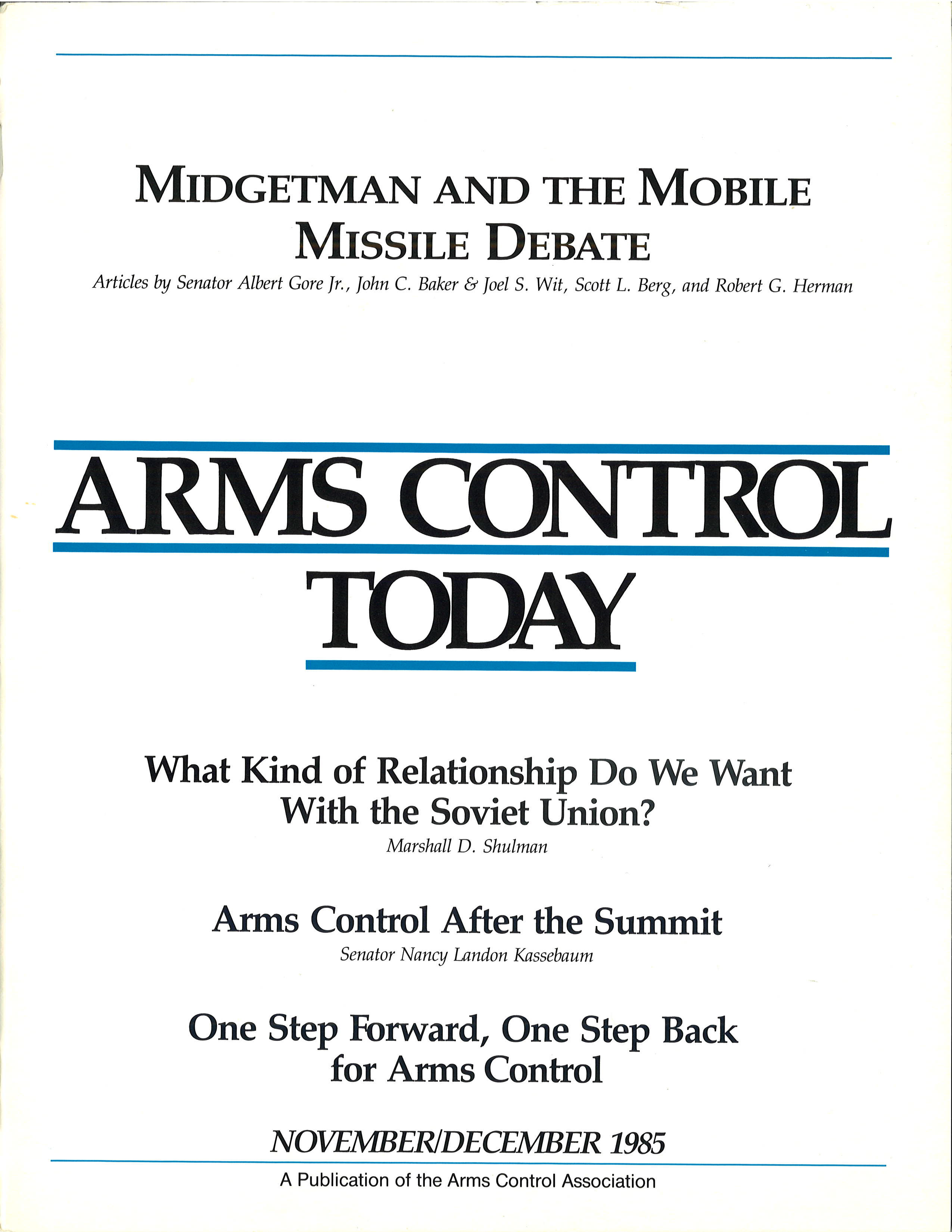 1984: The Association helps establish the National Campaign to Save the Anti-Ballistic Missile (ABM) Treaty and warns against the destabilizing and costly impact of the Strategic Defense Initiative.

1985: Arms Control Today expands from newsletter to journal format, which physicist Hans A. Bethe praises the following year as “by far the best magazine in the field.”

1986-87: The Scoville Visiting Lectureship program is launched and the Association serves as a host for the Scoville Peace Fellowship Program to bring young scholars into the field.

1989: The Association publishes the primer, Arms Control and National Security: An Introduction.

1991: Arms Control Today receives the 1991 Olive Branch Award for “outstanding” coverage of international security for a notable series of articles on the potential for terrorist acquisition of nuclear weapons material in the former Soviet Union. 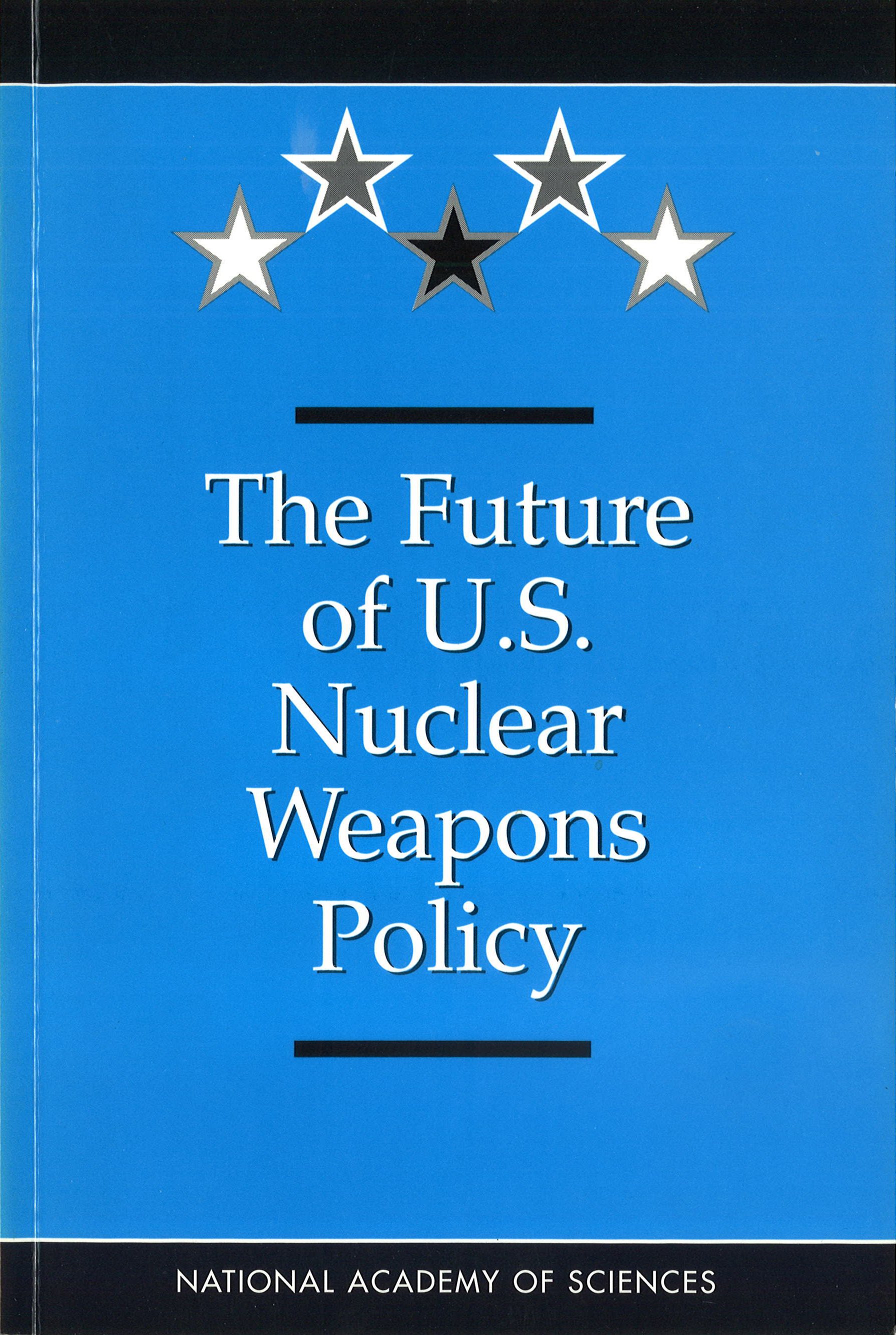 1994-95: The Association plays a major role in the Campaign for the NPT supporting the accord’s indefinite extension and strengthening of the nuclear-weapon states’ commitments to nuclear disarmament, including the Comprehensive Test Ban Treaty.

1997: www.armscontrol.org is launched, making Arms Control Today and other research products available to hundreds of thousands more readers on the Web.

1997-2000: The Association and other members of the Coalition to Reduce Nuclear Dangers wage a high-profile, but unsuccessful, bid to win Senate approval of the Comprehensive Test Ban Treaty and preserve the Arms Control and Disarmament Agency as an independent entity under new Executive Director Daryl G. Kimball.

2001: The Association exposes and helps counter efforts by administration hardliners to repudiate the U.S. signature of the Comprehensive Test Ban Treaty.

2002: The Association becomes the leading nongovernmental critic of the George W. Bush administration’s decision to withdraw from the ABM Treaty and to pursue new nuclear capabilities to destroy non-nuclear targets.

2002: The Association publicly urges the United States to restart talks with North Korea on implementation of its nonproliferation commitments and to avert a restart of its weapons program. 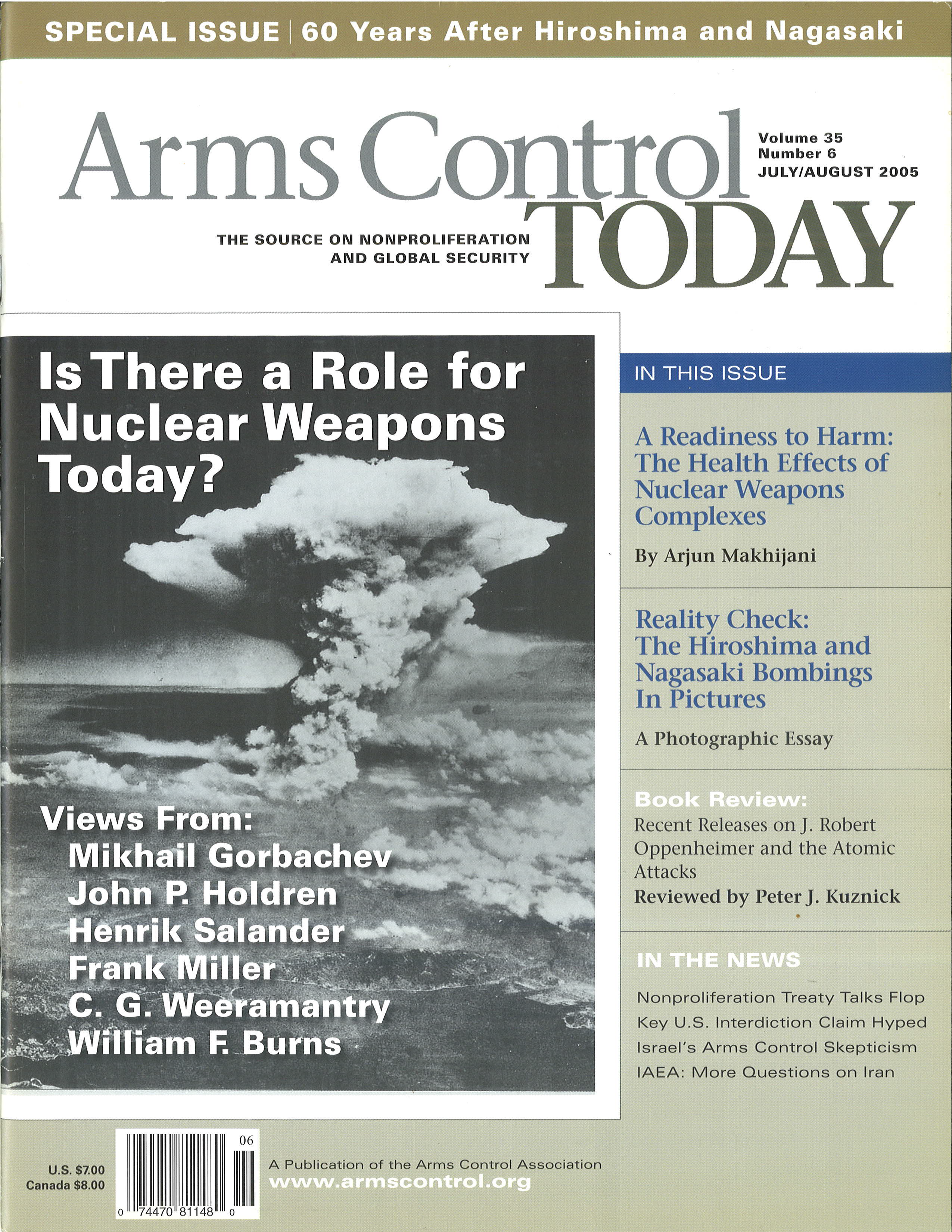 2003: Arms Control Today publishes a seminal article by a group of physicists and diplomats on the negative impact of new U.S. earth-penetrating nuclear weapons, sparking key members of the House and Senate to launch a campaign to stop the proposal.

2004: Arms Control Today is redesigned for the first time in nearly two decades.

2004: National Journal profiles Director Daryl Kimball as one of the 10 people whose ideas “will help shape the debate on nuclear weapons and nonproliferation in the years to come.”

2005: The Washington Post cites the Association as having successfully led the opposition to a proposal for research and development of a new U.S. earth-penetrating nuclear weapon

2005: The Association launches of a “Campaign to Strengthen the NPT,” which builds bipartisan support for a comprehensive U.S. nonproliferation strategy ahead of the 2005 NPT Review Conference.

2005: The Association publishes the influential report What Are Nuclear Weapons For? by Dr. Sidney Drell and Amb. James Goodby for steep nuclear reductions to 1,000 strategic warheads.

2005-08: The Association leads a campaign involving a diverse national and international coalition of NGOs and experts against exempting India from U.S. and global nuclear trade restrictions that almost tipped the balance against the deal, but nevertheless moved the U.S. Congress and the George W. Bush administration put key nonproliferation restrictions in place.

2006: The Association publishes an analysis highlighting the risks posed by a planned Iranian reactor at Arak capable of producing large quantities of plutonium, which prompts New York Times coverage and action by IAEA member states to stop technical assistance for the project.

2007: The Association develops a detailed legislative proposal for a comprehensive strategy to strengthen the nonproliferation and disarmament system, which is embraced by Sen. Barack Obama and Sen. Chuck Hagel and introduced as S. 1977 in August 2007. The bill became the blueprint for President Obama’s nuclear risk reduction strategy outlined in his speech in Prague in 2009.

2008: The Association publishes reports and articles by staff and by Board Member Rose Gottemoeller that provide ideas for the negotiation of a new strategic arms reduction treaty with Russia beginning the following year.

2008: Arms Control Today publishes an extensive Q & A with president-elect Barack Obama on his views and policies on nonproliferation and disarmament.

2009: The Project for the CTBT is created to coordinate public and policy education efforts on the CTBT. At request of the Presidential Transition Team, Association staff provide recommendations for test ban policy. 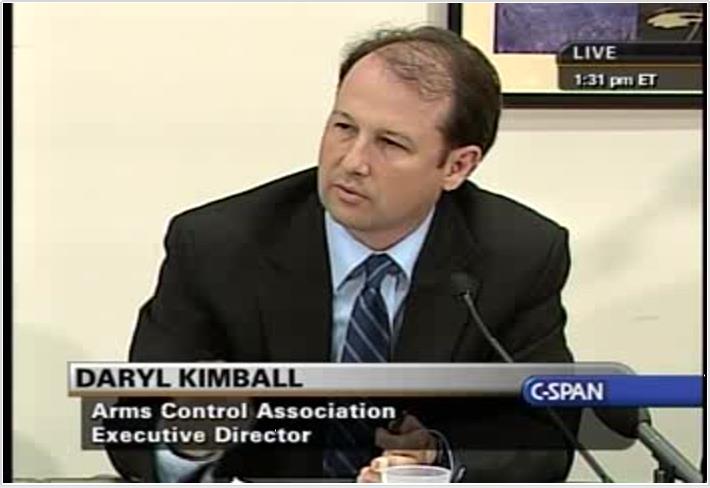 2009: The Association augments its research staff and launches new projects and reports with a focus on resolving threats posed by the Iranian nuclear and missile programs, improving nuclear material security, and ratification of the Comprehensive Test Ban Treaty and New START.

2010: The Association plays a leading role in the nongovernmental effort to build public understanding and support for the New Strategic Arms Reduction Treaty, which is narrowly approved by the Senate.

2010: The Association launches a series of conferences in Brussels, Warsaw, Ankara, and Washington on revising NATO’s nuclear policy and the future of U.S. tactical nuclear bombs in Europe.

2011: The MacArthur Foundation recognizes the Arms Control Association as an “exceptional organization that effectively addresses pressing national and international security challenges” with an “impact that is disproportionate to its small size,” and provides a major capacity-building grant.

2011: Following ratification of New START, the Association draws attention to the excessive cost and scope of U.S. plans to modernize all three legs of the nuclear “triad” and provides a detailed blueprint for achieving hundreds of billions in budget savings at current and lower nuclear force levels.

2011-16: The Association launches a series of widely-praised research reports that document—and seek to hold governments accountable—to the milestones and commitments agreed at their Nuclear Security Summits.

2012-20: The Association helps establish a 21-member U.S.-German-Russian experts commission to maintain an ongoing dialogue on how to address the growing obstacles to deeper nuclear weapons cuts. The Commission's reports and papers provide a practical plan for how Russia and the West can step back from the brink and renew dialogue and restraint. 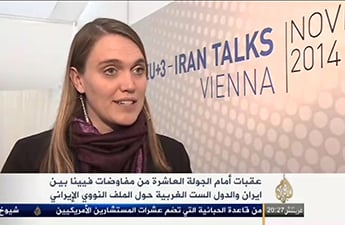 2013-15: The Association provides detailed analysis and information that shaped the thinking on the negotiations leading to the historic nuclear deal between Iran and six world powers, including an influential Arms Control Today article outlining an option for resolving concerns about Iran’s Arak reactor and an Arms Control Association-International Crisis Group white paper on a “Win-Win Formula for Defining Iran’s Enrichment Capacity.”

2014: The Association rolls out an expanded and updated version of its www.armscontrol.org website for its growing audience of more than a half-million visitors each year.

2014: Through the leadership of Board Chair John Steinbruner, the Association facilitates an historic U.S.-Iranian Religious Leaders Dialogue on the moral questions of nuclear weapons, which brought together top U.S. Catholic Bishops and Iranian clerics and produced a joint statement.

2014: The Association hosts the first Jonathan Tucker Conference on Chemical and Biological Arms Control with a special focus on the successful UN-OPCW mission to remove 1,300 tons of chemical weapons agent from war-torn Syria.

2015: The Association organizes statements demonstrating the overwhelming expert support for the Iran deal and becomes a go-to source for Congressional staff, as well as a diverse network of pro-diplomacy organizations, thereby helping to secure the Congressional support necessary to implement the agreement. 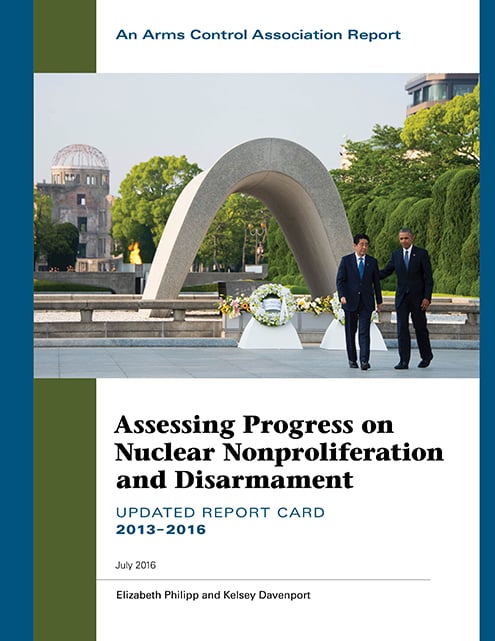 2016: After months of campaigning by a broad network of organizations, including the Arms Control Association, President Barack Obama became the first sitting U.S. president to visit Hiroshima, the site of the first atomic bombing.

2016: A new Arms Control Association report documents the failure of the nuclear weapon states to meet key disarmament commitments. Association researchers outline pathways for renewed progress at UN Open-Ended Working Group meetings on disarmament and praise the October vote by UN member states to launch talks on a new instrument to prohibit nuclear weapons as an important step that “could help to further delegitimize nuclear weapons and strengthen the legal and political norm against their use—a worthy goal.”

2016: Prompted by a research and advocacy campaign led by the Arms Control Association, along with the Stimson Center, the UN Security Council adopted Resolution 2310 on Sept. 23, which reinforces the global norm against nuclear testing and calls for action on the Comprehensive Test Ban Treaty (CTBT) on the 20th anniversary of the opening for signature of the treaty.

2017: Following a series of international conferences on the humanitarian impact of nuclear weapons that began in 2014 involving diplomats and civil society leaders, at the United Nations more than 120 states negotiated and adopted the first-ever global treaty that comprehensively prohibits nuclear weapons. Association staff engage with key governments, civil society leaders, and the media to help promote the adoption of the treaty and ensure the text was as technically sound as possible.

2017: The Arms Control Association help rally opposition to the President Trump’s threats of “fire and fury” against North Korea for its nuclear and missile tests and successfully make the case for direct U.S.-North Korean diplomacy on denuclearization and peace.

2018: The Arms Control Association advanced options to resolve the U.S.-Russian dispute over Russian compliance with the INF Treaty and mobilized bipartisan support for a decision to extend the New START agreement past 2021.

2018: Responding to the Trump administration’s unilateral withdrawal from the 2015 Iran nuclear deal, the Arms Control Association warns that the move will unnecessarily trigger a new nuclear crisis. Along with nongovernmental allies, the Association builds support for the United States and Iran to return to compliance with the deal, and to pursue follow-on talks designed to make the the 2015 deal longer and stronger.

2020: After learning about interagency discussions in which some U.S. officials proposed the resumption of nuclear testing for the first time in 28 years in order to try to intimidate Russia and China in future arms control talks, Arms Control Control Association staff helped key reporters blow the whistle on the effort. ACA then lead a lobbying effort in Congress to pass a House amendment to prohibit funding for a resumption of testing.

2019-2021: The Arms Control Association mobilizes bipartisan support for military and national security leaders and on Capitol Hill for a five-year extension of the New START agreement. Board Chairman Thomas Countryman testifies on Capitol Hill that "in the absence of New START, there will be no legally-binding limits on the world's two largest nuclear arsenals for the first time since 1972," which would open the door to a dangeorus new arms race. In keeping with the recommendations fowarded to the Biden transition team, President Biden and President Putin agree in February to extend the treaty until February 2021 and following their June Summit they agree to pursue talks on follow-on arms control agreements.

2007-present: Each year for more than a decade, the Association has recognized and the public has voted online for the “Arms Control Person of the Year” to recognize work of key leaders and institutions that have advanced effective arms control, nonproliferation, and disarmament solutions, and/or raised awareness of the threats posed by mass casualty weapons.